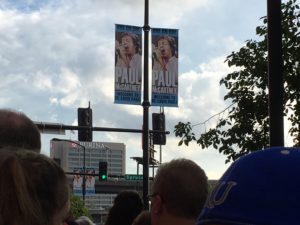 Waiting to sit in the stands of the sports arena.

Paul McCartney proved he could still play, sing, and shake it at his show in St Louis last Saturday night. Looking loose and sounding in fine voice, McCartney was clearly having a capital time with the capacity crowd at Busch Stadium. And–almost unbelievably, given the high winds, lightning, and sheets of rain of the preceding night–it didn’t even sprinkle.

In most respects the 38-song setlist reflected the kind of Beatles-heavy mix McCartney has favored in recent years. It included 23 Beatles songs, 5 Wings songs, and 6 solo songs. But the setlist also included two surprises, which proved to be the show’s chronological bookends. “In Spite of All the Danger” was the Quarrymen’s first (unreleased) single, cut in 1958. It’s also the only song ever credited to McCartney and George Harrison. “FourFiveSeconds,” co-written by McCartney and released by Rhianna, Kanye West, and McCartney, was released 57 years after the Quarrymen’s day in the studio.

For me, high points of the show included some songs I’d never heard McCartney do live before: “Letting Go,” “You Won’t See Me,” and “And I Love Her.” (During that last one, McCartney did a few full turns at the microphone, wiggling his hips in a jokey, “I know how to put on a show” way). Given my affection for “Ob-la-di, Ob-la-da” and the critical drubbing it often receives, it was a great pleasure to see how it energized the crowd and got folks up and dancing. And the familiar favorites received strong performances as well. At this point in his career McCartney plays each song — “Blackbird,” “Let It Be,” “Maybe I’m Amazed,” “Band on the Run,” “Can’t Buy Me Love,” etc. — as if it may be the last time he gets that chance. He seems genuinely to enjoy the audience’s enthusiasm and to be invested in its satisfaction, as he says in this recent New York Times interview. 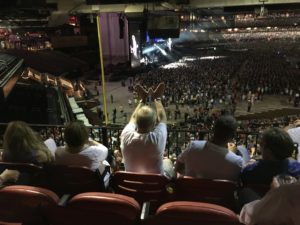 Wings Sign Guy was my favorite nearby audience member.

The overwhelming majority of us in the crowd were clearly having a fabulous time, judging from body language and the volume of sing-alongs. I’d like to give a special shout out to two people a few rows in front of me who were great fun to watch, who I thought of as Wings Sign Guy and Rock On Woman (see photos). Hokey as some may think it, I always find it moving to see and hear a crowd of tens of thousands responding joyfully to the music.

McCartney couldn’t get a positive review from everyone, of course. After the show, local paper Riverfront Times ran this blog piece about the concert experience of Mark Richman. Richman was 20 when he attended the Beatles’ St Louis show in 1966 and took these pictures of the performance. At McCartney’s show, Richman wasn’t happy with his seats on the field, with the way people stood up and blocked his view, or with the drunk guy dancing near him. He had this to say about the setlist:

“He said he’d do a bunch of Beatles songs. That’s what I was waiting to hear. But he left out about twenty of my favorites. He’s shifting his music to a younger audience, trying to sell more albums. My suggestion would be that on the next tour, he’d announce he’s doing nothing but Beatles songs. He’d sell out in five minutes.”

I was also a big fan of Rock On Woman.

It’s highly doubtful that McCartney’s concerned about selling out stadiums any faster than he already is — he’s added second nights at some venues on this tour in response to demand. But Richman’s comment highlights the dilemma that McCartney faces with every performance. Does he turn the show into a pure nostalgia act, playing nothing but Beatles songs? Does he play only new songs, like Bob Dylan on his current tour? Being McCartney, it’s unsurprising that he’s chosen the middle way, sampling songs from his entire career. More than wanting to sell albums, I suspect that he adds new songs to the setlist because he enjoys playing them and wants to remind himself, and us, that he’s still creating. He’s known for a long time that nothing he does could ever top his work with the Beatles, and he seems to have made his peace with that without giving up on doing new things. That’s an attitude I can only salute.