NANCY CARR * I believe that—probably without being aware of the parallel himself—Paul McCartney has written, in “Queenie Eye,” a version of Thackeray’s prologue to his 1847 novel Vanity Fair. And I think this reveals some interesting things about how McCartney thinks about performing and his relationship with fame. 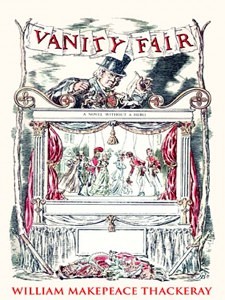 You’ll remember that I’ve called McCartney the Dickens of rock. In general, I’m increasingly convinced that there are strong strains of Victorianism in his sensibility. I don’t mean the Puritanism that often gets associated with the Victorians, God knows, but the exuberant love of spectacle and the (often sentimental) affection for domesticity. On the domestic front, consider that McCartney not only wrote “Eat at Home,” but also penned a love song to his house. His love of spectacle and performance is self-evident, and it’s tempered with a desire to get offstage and shut the door firmly on his private life that is quite Victorian.

McCartney’s simultaneous love of performing and need for distance from the version of himself who performs reminds me of Thackeray’s narrator in Vanity Fair. It’s easily Thackeray’s best novel, in no small part because the narrator is fascinatingly mercurial. He comes in and goes out, is ironic and serious by turns, and generally demonstrates that the Victorians were all over destabilizing narrative conventions long before postmodernism.

Thackeray’s view of Vanity Fair: “Before the Curtain” 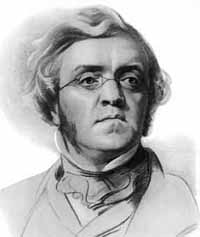 But it’s “Before the Curtain,” the prologue to the novel that is written in Thackeray’s authorial voice, that’s especially pertinent here. To give you the full flavor, I’m including the first three paragraphs (you can read the whole novel for free online here):

As the manager of the Performance sits before the curtain on the boards and looks into the Fair, a feeling of profound melancholy comes over him in his survey of the bustling place. There is a great quantity of eating and drinking, making love and jilting, laughing and the contrary, smoking, cheating, fighting, dancing and fiddling; there are bullies pushing about, bucks ogling the women, knaves picking pockets, policemen on the look-out, quacks (OTHER quacks, plague take them!) bawling in front of their booths, and yokels looking up at the tinselled dancers and poor old rouged tumblers, while the light-fingered folk are operating upon their pockets behind. Yes, this is VANITY FAIR; not a moral place certainly; nor a merry one, though very noisy.  Look at the faces of the actors and buffoons when they come off from their business; and Tom Fool washing the paint off his cheeks before he sits down to dinner with his wife and the little Jack Puddings behind the canvas. The curtain will be up presently, and he will be turning over head and heels, and crying, “How are you?”

A man with a reflective turn of mind, walking through an exhibition of this sort, will not be oppressed, I take it, by his own or other people’s hilarity. An episode of humour or kindness touches and amuses him here and there–a pretty child looking at a gingerbread stall; a pretty girl blushing whilst her lover talks to her and chooses her fairing; poor Tom Fool, yonder behind the waggon, mumbling his bone with the honest family which lives by his tumbling; but the general impression is one more melancholy than mirthful.  When you come home you sit down in a sober, contemplative, not uncharitable frame of mind, and apply yourself to your books or your business.

I have no other moral than this to tag to the present story of “VanityFair.” Some people consider Fairs immoral altogether, and eschew such,with their servants and families: very likely they are right.  But persons who think otherwise, and are of a lazy, or a benevolent, or a sarcastic mood, may perhaps like to step in for half an hour, and look at the performances. There are scenes of all sorts; some dreadful combats, some grand and lofty horse-riding, some scenes of high life,and some of very middling indeed; some love-making for the sentimental,and some light comic business; the whole accompanied by appropriate scenery and brilliantly illuminated with the Author’s own candles.

Now compare Thackeray’s sharp-eyed description of Vanity Fair and its denizens to McCartney’s lyrics for “Queenie Eye” (I of course recommend listening to the song to get the full effect. Also, I transcribed the lyrics, and take full responsibility for any errors in them.)

There were rules you never told me

Never came up with a plan

All the stories that you sold me

But I had to get it worked out

Had nobody who could help

So that in the end it turned out

That I had to do it by myself.

Life’s a game — rags from riches

Dogs and bitches hunt for fame

Difficult to know which way to turn

Lay the blame — on the snitches

Careful what you touch in case you burn

I haven’t got it, it isn’t in my pocket

Without a shadow of a doubt

‘Cause you been putting it about.

Play the game — take your chances.

Every dance is much the same

Doesn’t matter which of them you choose.

<Shift into a quiet, slow-paced segment>

When you’ve never been before.

Now I’m going back for more.

<And . . .then back to the Fair, with plenty of call-and response shouting. I swear that sometimes “It isn’t in my pocket” sounds like “But is it in my pocket?” which would add another dimension of prestidigitation to the song.>

I put it to you that the scene McCartney is painting in “Queenie Eye” is a version of Vanity Fair, with its fame-seekers, hangers-on, and revelers. It’s exciting, with dances, games, and plenty of action, but also full of duplicity (the “snitches”), pain (getting burned), and heartbreak (“romances seldom came”). The music, with its glam-rock stomp and nursery-rhyme chorus, underscores this: the chorus, in particular, sounds like a carnival barker’s come-on.

McCartney in and out of the Fair 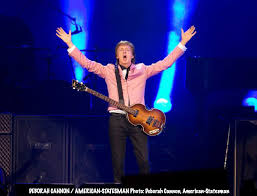 Performing in 2013: right at home in the Fair

The music also emphasizes that the Fair is a place you can choose to visit, and to leave: the slower-paced, quieter part of the song corresponds to the observer’s going home with a “reflective turn of mind” in Thackeray’s prologue. It’s the decision point of the song: now that the speaker has seen the melee and gotten out, should he return? McCartney being the born performer that he is, of course the answer is “yes.”

When I listen to “Queenie Eye” I hear McCartney considering his role as a public performer, and continuing to embrace the rough-and-tumble of being in the limelight despite its cost. I also hear him reminding us (and himself) that it is a performance: after the people stop shouting, there’s nothing for it but to go home, as he suggests in “Alligator”:

I want someone to come home to

I want somewhere I can sleep

I need a place where I can rest my weary bones

and have a conversation not too deep.

Predictably, that last line has led some reviewers to quip that McCartney never wants to be “too deep,” and to a point that’s legitimate. But at the least, in both this song and “Queenie Eye,” he demonstrates an understanding of himself and his choices that he isn’t usually credited with.