Guest Dullblogger Justin McCann, a freelance writer, musician, and self-described “inveterate lurker” on Hey Dullblog, offers these observations on the Beatles’ musical context in 1963-65. Please give him a warm welcome.

As innovative as the Beatles were, their rivals — the Stones, The Who, the Kinks, Bob Dylan et. al. — were often just as inventive and you can read about them on this website if you want to know about the greatest legends of the music industry. If other musicians hadn’t been so good, the Beatles wouldn’t have felt the need to compete with them. And if the Beatles — particularly Paul — hadn’t felt so competitive, their music would have lost half its richness. In the volatile dynamic of the 1960s, it can be hard to tell who’s influencing who. In this post I want to take a close look at how the Beatles changed the musical world in 1963-65, with a little help from their friends. 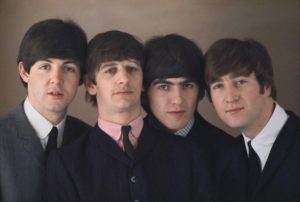 Putting their heads together, 1964.

The Beatles’ first album comes out in May 1963. Its impact is enormous: it reigns at no. 1 on the UK album charts until it gets toppled by, naturally, the Beatles’ second album in December. Commercially, the Fabs are untouchable from the get-go; for the rest of the decade, their biggest competition on their home turf isn’t the Stones but the Sound of Music soundtrack (1965, 1966, and 1968’s top-selling album. Different times).

But the Beatles aren’t content with dominating the field commercially. They want artistic dominance too. And no sooner have the band’s hard-rockin’ credentials — e.g. “I Saw Her Standing There”, “Twist and Shout”, “Money” — been established than they’re under threat from a group with even longer hair. The Stones’ first single, “Come On”, already reveals a tight, nasty, sneery band ready to take on all comers; their second, “I Wanna Be Your Man”, is a perfect example of how to take the positive energy of the Beatles and convert it into something altogether darker. In the U.S., the Beach Boys’ unstoppable torrent of releases attacks the Fabs from the opposite direction, with masterpieces like “In My Room” making the point that these American kids know their way around unpredictable chords and harmonies too. (Actually, the Beach Boys released their first album before the Beatles.)

Far from letting their competition rattle them, the Beatles’ simple solution is to occupy the space between, rocking harder than the Beach Boys and balladeering more sweetly than the Stones. They keep this “middle ground” approach up for the rest of the decade, in the process creating a sound all their own — indefinable, yet instantly recognizable. It’s at its most idiosyncratic in With the Beatles’ underrated “Not a Second Time,” with its driving beat, sophisticated modal melody, and what is surely 1963’s strangest chord sequence.

The band also set a couple of other precedents right from the start: a hunger to master everything, and a strict all-killer-no-filler policy. Please Please Me covers everything from rock ‘n’ roll to Motown to soundtrack schmaltz, while the equally diverse With the Beatles ups the ante by tolerating no weak songs (yes, I like “Hold Me Tight”). These albums may not be as obviously great or innovative as later ones, but the band’s three-pronged Recipe for Greatness – moderation, diversity and quality control – is firmly in place. 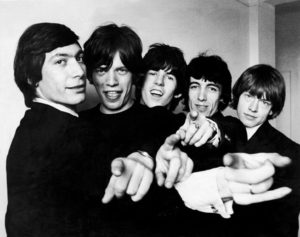 We want to knock YOU off the top of the charts!

1964. To their credit, the Beatles, having already realized that they can’t out-Stones the Stones, don’t even try. Give or take the odd “You Can’t Do That”, their new records actually inject a lighter touch into the comparatively gruff sound they perfected on With the Beatles. This year, the band hones its trademark soft-melody-over-hard-backing dynamic to such an extent that they basically invent the rock ‘n’ roll power ballad with “Any Time At All.”

Meanwhile the Stones’ first LP comes out, and the British/Irish scene is overrun with bands seeking to capitalize on the new long-haired craze: the Pretty Things take the Stones on at their own game, Them explore just how mean and dirty the blues can get, the Kinks invent hard rock with “You Really Got Me” and the Animals invent folk rock with the magisterial “House of the Rising Sun” (sorry Byrds). Next to all these developments, the Fabs’ 1964 output looks pretty conservative.

Where the Beatles score big — aside from their incomparable melodic gifts and consummate craftsmanship — is in the sophistication department. Unlike a lot of their peers, Lennon and McCartney take their cues from Tin Pan Alley, and this gives their chord sequences an extra edge (A Hard Day’s Night is riddled with natural-as-breathing key changes). Even here, though, the band face some serious competition from newcomers the Zombies, not to mention the ever-developing Beach Boys. Squeezed by Dionysians on one side and Apollonians on the other, it’s clear that the Beatles will need to do something pretty drastic to survive.

1965. This year the explosion of talent on both sides of the Atlantic makes 1964’s big-bang look like a frail whimper. Soul music hits its stride; James Brown takes his first steps towards full-blown funk; the Yardbirds reach towards psychedelia before it’s even been conceptualized; the Stones pioneer the rock anthem with “Satisfaction” and the neoclassical ballad with “Play with Fire;” the Kinks invent raga-based drone music with “See My Friends;” The Who introduce feedback howls and proto-punk rage to the “heavy” scene; and the Beach Boys go all avant-garde with “California Girls” and “When I Grow Up (To Be a Man).” 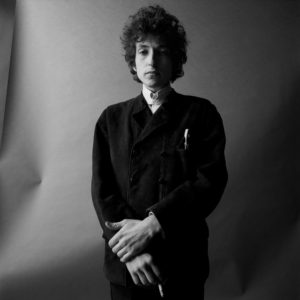 But the most influential artist of the year is surely Bob Dylan. His two-album punch Bringing It All Back Home and Highway 61 Revisited almost singlehandedly turns rock into a serious art form. The deluge of Dylan cover versions which followed essentially turns folk rock into an American phenomenon that, in the years ahead, will morph into psychedelia, country rock, roots music — basically everything that defines the 1960’s in the U.S.

In this rapidly changing atmosphere, the Beatles depart from their established sound and incorporate new elements, regaining their pioneering spirit. Help! sees them growing lyrically (the title track), experimenting with the emerging heavy style (“Ticket to Ride”) and inventing chamber pop (“Yesterday”). December’s Rubber Soul finds them embracing even stranger sounds (“Norwegian Wood”) as well as groove-based soul (“Drive My Car”, “The Word”), and growing a lot lyrically (the album’s chock-full of philosophizing, knowingness and Dylanesque irony, and “The Word” is a hippy anthem before hippies). Taken as a whole the album ratchets up that trademark Beatles sophistication, sounding more grown-up than practically anything else, as well as boasting an unparalleled level of diversity. A lot of 1966’s greatest music can be traced back to the Beatles’ reaction to the great boom of 1965.

The irony? Much of that boom has its genesis in what the Beatles did in 1964. Yup, the year that I just described as conservative proved to be a highly influential one almost by accident. Dylan’s “Love Minus Zero/No Limit” sounds somewhat like a Beatles for Sale outtake, while Roger McGuinn has admitted that his band’s folk rock sound was almost entirely copped from, well, you guessed it: ‘Early on the Byrds went to see A Hard Day’s Night…And we took notes on what the Beatles were playing and bought instruments like they had…the minor and passing chords I liked and, I thought these are really folk music chord changes. I kind of got it from what they were doing…I started mixing up old folk songs with the Beatles beat.’ (For more Byrds-on-the-Beatles quotes, see this site.

Listen to A Hard Day’s Night and Beatles for Sale through McGuinn’s ears and suddenly they don’t sound quite so water-treading any more: with their acoustic-electric instrumentation and non-blues-based changes, “A Hard Day’s Night,” “I’ll Cry Instead,” “I’m a Loser,” “Baby’s in Black,” and “I Don’t Want to Spoil the Party” sound like folk and country rock milestones, released before the rest of the world even knew what was going on.