I was born on April 3, 1964, the week The Beatles saturated the US pop charts like no act before or since, claiming the first five songs and fully fourteen percent of the top 100. But I wouldn’t hear them until some years later, when they would spark my first ideas of God. 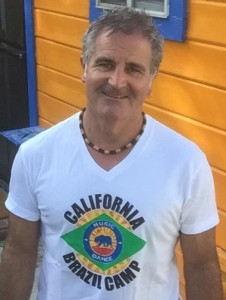 Chris Dingman — you can read more about him and his projects at the end of this post.

We tend to see Copernicus’s realization that the earth revolves around the sun instead of vice versa as the beginning of the end of a self-centered human pride. “We used to think we were all that, but now we know we’re just a puny speck floating in empty black space.” This misrepresents things. The older medieval picture was not a vision of grandiosity, but of grandeur. The earth may have been at the center of things, but it was the lowest rung of the ladder. We were surrounded by resplendent shells, filled with angels, and the outermost ring was God. If the earth was fallen, the universe was still a place of light and hope—an opportunity, as Pico dela Mirandola reminded his Renaissance peers, for man to ascend.

So we lost something when we saw the universe for what it supposedly was—cold, dark, and uncaring. We are now supposed to be content with the “elegance” (brutality) of natural selection and the idea that our inert atoms will return to mindless natural cycles, even if our dreaming selves will be forever extinguished. And the eternal longing of the human soul? Just wait for the next iPhone.

I grew up in a tiny town in rural New Hampshire and spent a lot of time in the woods, which served as my church. But I wouldn’t have used that word. My parents were heathens, so God never came up. We got one TV channel and I don’t remember ever listening to the radio. But my mom had some old Beatles records. When I listened to them, around 1971, I thought, “If there is a God, he’s speaking through these guys.”

The music alone was all I needed to feel something ineffable was afoot. Just to prove how medieval I am, though, let me add more tantalizing evidence that the Beatles were, for a time, incarnations of the divine.

The Beatles as representatives of the divine

First, they were a group of four, a number that has traditionally symbolized fullness and divinity. It’s the reason there are four gospels. In the early days of Christianity, the ancient world was abuzz with myriad accounts of Jesus’s life. Around 170 CE, however, an influential French bishop named Irenaeus decided it was time to impose some order: “There actually are only four authentic gospels. And this is obviously true because there are four corners of the universe and there are four principal winds, and therefore there can be only four gospels that are authentic.” Pythagoras saw the number four as perfect and a symbol of God. Jung’s image for a human’s fully-realized divine self was the mandala, a circle divided into four quadrants. Of course, there are also four directions, four seasons, and four leaves on the lucky clovers that abound in the land of John’s and Paul’s ancestors. 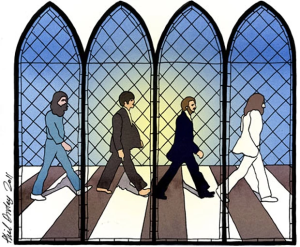 Speaking of which, the names John and Paul are Biblically resonant. Coincidence? Probably. But let’s pretend it’s not. George gets a pass for his unspiritual name (it means farmer or “earthworker”) by being the most spiritually keen of the lot, urging everyone to see God everywhere. It was George who convinced his brethren to visit the Maharishi in England and then follow the guru to India for a fuller immersion. Most consciously of the four, George pushed overt spirituality. He also universalized it beyond mere Christianity, just as many Renaissance neo-Platonists did. At the same time, he could remind us most of a preachy—even bitter—Christian minister.

But humor is what always saved George. It saved all the Beatles—from grandiosity. In fact they sometimes seemed as much a troupe of clowns as a band. And thus we come to Ringo—the divine fool, who grounds everything. “Are you mods or rockers,” bleats a reporter. “Neither,” quips Ringo, “We’re mockers.” His other “Ringoisms” are the stuff of Beatle legend and song title, including “Hard Day’s Night,” and “Tomorrow Never Knows.” Ringo started at the lowest of earthly rungs—poor, sickly, academically disinclined. But Jesus said, “The stone that is rejected has become the cornerstone,” or in this case the backbeat. Ringo had a taste of the kingdom of heaven in the love of his family, then later when he couldn’t stop rat-a-tat-tatting on the cabinets next to his hospital bed. He recognized it again when he heard The Beatles. And he wanted in. He was already wearing little round symbols of divinity on his fingers—he’d already been born again, from Richard Starkey to Ringo Starr.

If The Beatles didn’t represent something as powerful as religion, then they wouldn’t have been perceived as a threat to it. John led the charge, and made the comparison explicit with his 1966 “bigger than Jesus” remark. Though he didn’t mean it in quite the lofty way it was interpreted, his words were just the spark that touched off the pile of kindling that had been growing over their brilliant career—the resentment that a group of long-haired kids could move people in a way that formal religion no longer could. Lennon of course went on to become a sort of Christ-figure to many. He even bought it literally for a spell during the weird years of Apple Corps, solemnly announcing at a band meeting that he was in fact Jesus. Ten years later, he was martyred. 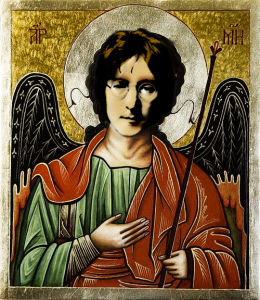 Not to be outdone, Paul was also killed—and then resurrected. At least he was in the popular imagination of 1969, when the “Paul is dead” rumor mysteriously arose. It was also around that year that some of Paul’s greatest songs achieved an unrivaled ecclesiastical grandeur—think, “Let it Be,” “Hey Jude” (Jude being a saint), or “The Long and Winding Road.” On that note, the composer Howard Goodall points out that several of Paul’s songs throughout his Beatles years (“Eleanor Rigby,” “Yesterday,” “She’s Leaving Home,” “And I Love Her”) end in a two chord sequence known as a plagal cadence, which was highly unusual in the popular music Paul was exposed to as a boy—they are not to be found in fifties rock ‘n’ roll, his father’s dance band music, Hollywood movie musicals, or music hall. Where they can be found is in hymns.

And if Paul never quite believed he was Jesus, he did have his own glimpses of the divine. He famously heard an echo of the medieval world-view the first time he got high and whispered momentously to Beatles assistant Mal Evans, “There are seven levels.” He kept on toking for decades. But that gleam of something higher, calling him upwards, seems to have been there in the beginning for Paul. As a boy his favorite song, the one he kept telling his dad to “play it again” on the piano, was Gershwin’s “I’ll Build a Stairway to Paradise.” The first verse goes, “All you preachers/ Who delight in panning the dancing teachers,/ Let me tell you there are a lot of features/ Of the dance that carry you through/ The gates of Heaven.” The chorus reads like a blueprint for Paul’s meteoric rise from the mundane to the divine, from working class to royalty, from earth to heaven:

I’ll build a stairway to Paradise
With a new step ev’ry day!
I’m gonna get there at any price;
Stand aside, I’m on my way!
I’ve got the blues
And up above it’s so fair.

The unlikely, lowly origins are part of the Beatles myth, part of their religious resonance. Jesus was born a poor carpenter in the backwater town of Nazareth, even though the Messiah should have come from somewhere more impressive (In order to fulfill a Jewish prophecy, the author of “Luke” invents a story—highly unlikely, according to historians—that Jesus was born in Bethlehem.) Liverpool was the Beatles’ Nazareth—uncultured hicks lived there. London was where important things were supposed to happen. But to paraphrase Matthew 7:29, The Beatles after Hamburg, “sang as one who had authority.”

His geographic origins aside though, Jesus presented a more fundamental conflation of the lowly and the exalted: how could a man also be God? At the Council of Nicaea in 325 CE, a group of bishops decided he was both at the same time. Lennon’s self-appraisal seems to have bounced back and forth between analogous extremes, with however no final verdict. Was he the greatest thing that ever walked the earth, he wondered, or a pile of shit? A genius or a madman? (“Help!” “I’m a Loser!”) With regard to his voice, at any rate, he needn’t have worried—his insecurity about his singing was in miraculous contrast to its brilliance. 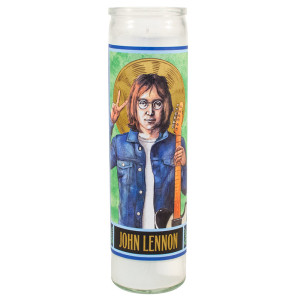 Finally, here’s an intriguing tidbit I ran across in Peter Carlin’s McCartney bio. In the early days, when John and Paul were first flexing their creative muscles, first forming an idea of themselves as original artists, we know they mostly wrote songs. But they also went off on a little creative diversion. They began outlining an idea for a play about a Christ-like figure, named Pilchard, whose divinity was under question in part because he wouldn’t come down from his room. Freed from the limiting forms and conventions of songwriting—Buddy Holly-type ditties about finding and losing love—their imaginations naturally drifted to a subject that must have held tremendous unconscious fascination for them: the story of a possible savior who could be living just next door—or even closer (and presumably named Pilchard Christ). Somehow that now seems perfectly logical.

Like the medieval universe, the Beatles themselves can be seen as a series of concentric circles. In the center is a simple rock and roll band—“we were just four guys,” says John on The Beatles Anthology. On the next circle is the Beatles as the greatest band of their time. On the next they are—at least according to Howard Goodall—the saviors of Western Music. I’m sure there are more circles. But at the outermost, I submit, they are symbols of something irreducible by science and inexpressible in words—something exuberant, radiant, irreverent and alive. At least that’s what they’ve always been to me.

There went the Sun Kings. Can anything replace them? Do we need anything to?

Chris has written comedy, screenplays, comedy screenplays, poetry and pop songs. He is currently at play on his first book, in which he hopes to convince even intelligent skeptics that “faith is human and desire divine.” He lives in Martinez, CA with his cactus, Pete. He blogs at nosuchthingasastraightline.wordpress.com, and has released three Crooked Roads CDs. You can listen free to his latest music here.