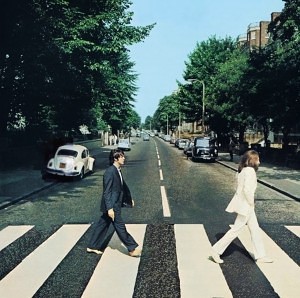 DEVIN McKINNEY  •  Offered in spirits of love and objectivity:

One notices that the talk at Hey Dullblog tends, in a broad sense, to revolve around, or devolve toward, precisely two subjects: John and Paul. (Or John or Paul; or John versus Paul. Or John. Or Paul.) Start at virtually any discussion point, and reader heat will amass itself around their two heads—as if they were not just the most interesting of the four, which they are, but as if they were the four in total, which they are not. It’s only natural, in a sense, to gravitate to John and/or Paul rather than George and/or Ringo, because they wrote most of the songs, determined most of the direction, produced (in Paul’s case, at least) larger bodies of work, and thereby make themselves more available, both individually and interpersonally, to our intrigued analysis. But because the gravitation is natural and the resultant conversation easier does not change the fact that George and Ringo deserve their piece of our action. Their relative absence from our boards is a way of saying that they don’t matter. I don’t think any of us believes that. But what are we going to do about it?

The presence of an absence

In assembling my Top 10 Beatles musical micro-moments recently, I found myself returning, again and again, to Ringo’s drumming. Which got me thinking, not for the first time, how few bytes are devoted on this blog to extolling the essential virtues, or merely noting the more-than-incidental existence, of the two Beatles who were not John and Paul—those virtues including ones of musicianship, personality, ego maintenance, and ego imposition. (Do we forget that Ringo was the first to quit the Beatles? And that George was the second? No, but yes.) A couple of years ago there was a flutter of commentary at Hey Dullblog around George, spurred by the co-release of the Living in the Material World documentary and Early Takes: Volume 1 album; but the flutter passed, and much of it was taken up with the concern of some folks that a trend might be afoot to mistakenly accord George more than due credit in the band’s alchemy-synergy-syzygy-whatever—which is another way of effectively withholding from him any credit, and thereby choosing not to deal with the caress of his solo on “Something,” his drone-whisper vocal on “Long, Long, Long,” his early forays into Moogscaping with Electronic Music, or the fact that many earlier Beatles tracks were made to live and bleed by his knife-like interjection of the vital guitar slice.

There’s an enormous backlog of Harrison and Starr work, both within and beyond the Beatles’ group output, which simply never gets mentioned here. The truth, yes: Most of the work I’m referring to—the solo work—is bad. Some of it, depressingly so; some of it, to which I’ve exposed myself seldom and judiciously, so bad as to nearly defeat my will to live. And many would call that sufficient reason to not waste space on it—even blogspace, though it is theoretically unlimited and doesn’t kill trees. But as a critic, I want to read someone who cares about an artist say why and how the artist’s work is bad, when it is, for the simple reason that exposure to bad work is utterly essential to focusing our sense of good work. It helps form our larger comprehension of an artist’s unique contribution, the shape of his or her artistic personality, just as bad days as well as good help form our comprehension of life. (Certainly we at HD have applied this logic to Paul, whose musical misfires and close-but-no-cigars, along with his great and “merely” interesting work, have received ample airing in our posts.)

There are at least two more reasons why the work of Harrison and Starr should be recognized at Hey Dullblog—even if that recognition amounts to simply “Guess what, that drum fill really kicks it up a notch” or “Guess what, the critics were right about [insert windsucking solo album here] all along.” The first reason is that Hey Dullblog is a Beatles site, not a John-and-Paul site. It was always implicit in our mission that everything in the Beatle world—for that matter, anything tangential to but somehow touching that world—lay within our scope; and I often feel we don’t put that voracity to a hardy enough test. It’s like the old saw about how you use only a small percentage of your brain’s full potential: Often we fall back to the fall-back of John-and/or-Paul because we’re not reaching beyond conversations we’re already comfortable having.

The second reason is that, right here, Hey Dullblog has a perfect opportunity to do what it always says, or at least implies, it would like to do—reconsider, or rewrite, or overturn entirely the critical-historical orthodoxies that exist around the Beatles, which are (sometimes against contradictory evidence, but whatever) seen to have taken seed in the virgin soil of late ‘60s Rolling Stone, and grown therefrom into a virtual consensus on John Lennon’s identity as the band’s sole genius, and a Paul-bashing industry which is only now beginning to crumble before the unimpeachable evidence of decades and the enormity of a musical corpus to which the term “wide-ranging” is woefully inadequate. But George and Ringo have likewise been the victims, or at best the unwilling recipients, of limiting judgments—which, in their case, back-seat them to their ruling geniuses, and assign values to their group and solo work that, to me at least, sometimes seem merely critic-conditioned and era-specific, and are to that extent open to the same revision that has, on the one hand, anointed RAM a box-worthy magnum opus, and on the other, demoted Double Fantasy to something less than the conjugal classic it was considered, understandably, to be in the immediate wake and lasting aftermath of John’s murder and Yoko’s bereavement.

For all the attention George and Ringo get at Hey Dullblog, anyone would think they were a glorified Jesse Ed Davis and Jim Keltner. Is that the case? Then let it stand examination. Is the case more complicated than that? Then let us complicate it. Is there no one here who might find shades of reevaluation in George’s or Ringo’s work or overall role, within or without the Beatles? Is the RINGO album still as good today as it was when we were 15, or 27? Is Gone Troppo still as bad? I, for one, would be curious to see a thoughtful consideration of, say, the strengths and weaknesses of the Dark Horse or Ringo’s Rotogravure albums from the perspective of, not 1974 or 1976, but right now—not necessarily because they will contain forgotten treasures, but because they are unfamiliar, far from exhausted subjects, and because they constitute a large portion of those vast Beatle realms to which we never turn our attentions here because they are not marked “John” or “Paul.”

And who knows, maybe those bad albums do contain treasures we’ve forgotten, or tuned out at the time, or never heard in the first place. Treasures are sometimes found in the trash. At the very least, I can attest that I find Living in the Material World to be half an astonishingly beautiful album, and that that half merits comparison with the highlights of All Things Must Pass. Yet after being drubbed or dismissed at the time by Robert Christgau, the run of the rock press, and the Carr-Tyler Beatles Illustrated Record (a book which, much as I adore it, shaped or misshaped my opinion toward the Beatles’ collective and solo work for more years than I care to admit), Material World, along with its numerous neighbors in the bizarre Harrison menagerie, has pretty much dropped out of the ongoing Beatles conversation. This is partly due, it’s true, to an almost complete absence of the kind of estate-based curatorial efforts which, vide the steady stream of reissues and revamps from the Lennon and McCartney camps, insist on a revisioning of works whose aesthetic worth seemed to have been decided eons ago. (See again RAM, and its likewise boxed-up Macca siblings; and, from John via Yoko, Menlove Avenue, the Lennon Anthology box, the Acoustic demos, etc.) We’ve been working for some time to rehabilitate Paul from his near-crippling at the hands of Jon Landau and know-little rockists. Let’s do something for George and Ringo—or at least look into their case files. If they are beyond rehabilitation, attention will tell.

The prescience of an abscess

So enough preamble. My New Year’s resolution, decided just this morning, is to get more George and Ringo into Hey Dullblog. I vow to devote numerous postings in 2014 to one or the other (or both)—along with whatever other Beatlecentric notions flit across the blank space between my ears: appreciations of their moments of mastery and transcendence, and cold-sober considerations of their mooning croons, rickety licks, fusty funk, and deadly disco. If you ask how one shows respects to Messrs. Harrison and Starr by highlighting portions of their catalogs that have lain cold and stiff lo these many years, I answer that attention of any kind is a form of respect, and furthermore that serious attention—honest, sympathetic assessment from a foundation of love and admiration—is the highest respect a critic, or any fan, can pay an artist.

This all begins with tomorrow’s post: a new approach for a new year.