The tireless George Starostin, still working his way through Rate Your Music’s list of “Top Albums of All Time,” has just published a new review of the White Album (currently #25 on the list). As usual, there’s plenty of substance in Starostin’s review, and I highly recommend it. These lines particularly stood out to me (ellipses mine):

“A typical ‘complaint’ against The Beatles is that this is the first album where the band, much too often, reads like the sum of its parts rather than a collective whole: The Lennon songs are Lennon, the McCartney songs are McCartney, the Harrison songs mark his complete transformation into an individualistic artist in his own rights, and even Ringo could make the sound of “Don’t Pass Me By” symbolic of his upcoming solo career. As true as it is, I think that, at least in the case of the White Album . . . this is a plus rather than a minus. On one hand, even at their most separatist-secessionist, there was still some sort of intuitive understanding of what could pass for a ‘Beatles song’ and what could not; and on the other hand, this is what helps make The Beatles the most sincere-sounding, straight-from-the-heart record of the band’s career up to that point.” 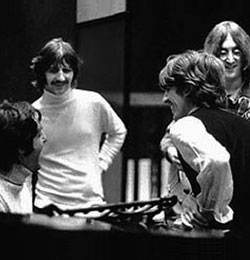 The claim that this is the most “sincere-sounding, straight from the heart record” the Beatles had made to this point makes sense to me, and I think it accounts for why many fans rank this close to or at the top of their list of favorite Beatles albums. Certainly there’s a sense of looseness and wildness to the proceedings, an atmosphere of “anything goes” that’s very different from the ramshackle feeling of Magical Mystery Tour.

I’m less enamored of Starostin’s decision to structure the rest of the review as lining up pairs of songs and asking who wins in the Lennon/McCartney “battle” — even his explicit statement that this is “as silly a topic for conversation as it is inescapably attractive” can’t redeem, for me, the tiredness of this framework. It’s not even that I disagree with him about the merits of most of the songs he writes about (though I  must admit I can’t fathom prizing “Sexy Sadie” above “Blackbird”), it’s that writing about them in this “who wins” way obscures how much collaboration there actually is in this album. “Dear Prudence” needs that bass line, “Ob-la-di, Ob-la-da” needs that fierce piano intro, etc.

But once again Starostin has succeeded in making me think through my reactions to this album, and I’m reminded anew of how much I appreciate his overall fair-mindedness. The White Album is indeed “an album about nothing in particular, an album about everything and then some.” My attitude toward this album (and increasingly to life in general) is summed up by two lines from “Martha My Dear”: “When you find yourself in the thick of it / help yourself to a bit of what is all around you.”