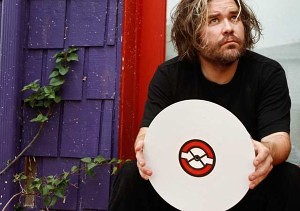 LA-based DJ Chris Holmes. Now that I know what he looks like, maybe I’ll bump into him.

Rolling Stone comes in for a lot of licks here on Dullblog, mostly from me, mostly for its role in canonizing Lennon and demonizing McCartney in the early 70s. But they’ve gotten their act together since then, and the Stone‘s relentless Boomer-focus means that they do get into some interesting Beatle-related nooks and crannies.

This article for example, on McCartney’s DJ Chris Holmes. Holmes’ mixes have been warming up Paul’s crowd since 2009; he provided his set to RollingStone.com, and I’ve been listening to it all night. (My cat is deaf, my wife tolerant — though “Temporary Secretary” did make her say, “Uh, we listen to this song a lot.”)

Anyway, Holmes’ mix is great stuff. There are a lot of interesting covers, and the Beatles/Wings/mashup aspect occupies a midpoint between the original tracks, and wider-ranging experiments like “Twin Freaks,” which is also damn fine, but maybe a bit outré for Paul’s concert crowd? I defer to our multiple–McCartney concertgoer Nancy; I blush to admit I’ve never seen Paul live. Something I plan to rectify in 2015.

The Many Faces of Coming Up