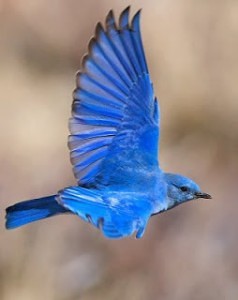 {Another in what is becoming a series of meditations on themes in McCartney’s music. Let me know if I’ve missed any bird references! –Nancy}

Birds and wings show up again and again in Paul McCartney’s music–but only in his better music. I’ll go out on a critical limb and declare that whenever McCartney writes about birds or flying– even in passing–he’s revealing a great deal about himself. When he writes about birds McCartney is working to transmute his feelings into music, and even his bird-featuring songs that aren’t critical favorites have much to redeem them.  I think it’s no coincidence that his worst solo albums contain no birds at all. Take a look at this aviary and see what you think.

“Blackbird” (1968, White Album)
McCartney presents this as a Civil Rights song, and it has those overtones, but I hear it as a song with personal significance as well. It was during work on the “tension album” that McCartney wrote this first song about flying off to freedom. And this song was a pure solo production: no other band members contributed to its composition or played on it. I think “Blackbird” expresses both his desire to get out of the fraught Beatles situation and his trepidation about what that leaving would be like. McCartney’s blackbird has to learn to fly despite “broken wings” and is taking off into the less-than-inviting prospect of the “light of a dark black night.”

“You Are My Singer” (1971, Wild Life)
Appearing on the first Wings album, this song includes the lines “Someday when we’re singing / We will fly away, going winging,” sung by both Paul and Linda. Now the escape is specifically a musical and shared one: the implication is that the power of music can lift the singers romantically above the clouds.  (And, of course, the band is called Wings.)

“Single Pigeon” (1973, Red Rose Speedway)
In this song the singer identifies with the lone pigeon flying over Regent’s Park Canal: “Do you need a friend for a minute or two? / Me too — I’m a lot like you.” In this case the singer imagines the pigeon having been thrown out by his mate after a fight, just as he has been. Here a bird is again a marker for emotion, and identification with the bird affords a measure of comfort.

“Bluebird” (1973, Band on the Run)
Band on the Run‘s title song is about breaking free, and in “Bluebird” birds explicitly symbolize transformation and escape. Once changed into bluebirds, the lovers will fly far away to a “desert island” where they can sing in the trees. It’s significant that the album was recorded under difficult circumstances, with only Denny Laine remaining in the band with Paul and Linda, and with various issues arising in Lagos. Like “Blackbird,” these bluebirds are winging away from a tension-filled life.

After “Bluebird” there is a long, long gap in references to birds or flying in McCartney’s music. The later 1970s were a time of relative stability for McCartney: he’d finally achieved a measure of critical respect with “Band on the Run,” he and Linda were happily raising a family, and until the end of the decade Wings was a highly successful touring band. The bluebirds were living in the trees, so to speak, and perhaps he didn’t feel a further need to write about them.

The end of the 1970s brought two hammer blows: his early 1980 bust in Japan, and John Lennon’s murder in December of that year. Apart from 1982’s Tug of War, this decade was a retreat from risk and self-revelation for McCartney, a retrenchment I think was driven by Lennon’s death. McCartney and Lennon never fully made their peace, and that coupled with the rise of the cult of St. John was very hard on him. McCartney has always preferred to reveal his deepest feelings indirectly, often through character or story songs, but in this period McCartney can be justly accused of releasing music without quality or substance.

Much of his 1980s music sounds like a desperate bid for popularity, and the mid-1980s were marked by a trifecta of truly awful McCartney albums (Pipes of Peace in 1983, Give My Regards to Broad Street in 1984, and Press to Play in 1986). After this dismal run 1989’s Flowers in the Dirt was a welcome sign of new life. In 1995 McCartney got together with George Harrison and Ringo Starr for the Beatles Anthology sessions, and the quality of his music picked up. 1997’s Flaming Pie was the best work he’d done in years.

McCartney made a real leap forward in 1998, with the Fireman’s “Rushes” album. Linda McCartney died in April of that year, and “Rushes” was released that September. This ambient/electronic album — still far too little known and appreciated — is clearly McCartney’s way of dealing with Linda’s death in musical terms. (This could be the subject of a whole post). In keeping with McCartney’s preference for keeping his deepest emotions veiled, Rushes was released with no indication of his involvement in the project.

I don’t think it’s coincidental that after this emotional reckoning the birds come back.

“Rinse the Raindrops” (2001, Driving Rain)
Easily the most harrowing song McCartney has written, all the bleaker for the contrast between the optimistic words and the crushingly intense music. McCartney employs the birds/escape metaphor here, but the music and his agitated vocal delivery belie the surface meaning of the lyrics: “See the sunlight, break the ice / For the birds of paradise / Listen to the song they sing / Awakening.” It’s clear from both the instrumentation and Paul’s singing that this won’t happen — it’s a wish (for Linda? For himself?) made without hope.

“You Tell Me” (2007, Memory Almost Full)
In this song the bird — “the bright red cardinal flew down from his tree” — is a marker of a time lost and betrayed. The singer is addressing his betrayer and asking her to tell him if anything he remembers of a summer of happiness and love was real. Once again McCartney is allowing real life and its emotions, in this case his divorce from Heather Mills, to inform his songwriting. The bitter, menacing delivery of the song is miles from the kind of faux perkiness that marks McCartney’s worst 1980s work. This is a ballad with devastating bite.

“Two Magpies” (2008, Electric Arguments)
In this song from the third Fireman album the bird as a genuine sign of hope returns. McCartney uses the old rhyme “One for sorrow / two for joy / three for a girl / four for a boy” as the basis of a simple acoustic number about finding love again. “Electric Arguments” is the first album McCartney worked on after beginning a relationship with his now-wife Nancy Shevell, and it’s telling that there are two magpies, just as there were two bluebirds flying off together.

“Bye Bye Blackbird” (2012, Kisses on the Bottom)
Obviously not a McCartney original, but his choice to record this standard–and to pace it as he did– is intriguing. He sings it much slower than the original recording, and the effect blends determination and weariness. The speaker is moving on from the unfriendly place represented by the blackbird–the place where no one “loves or understands me”–to be with someone who loves him. “Pack up all my care and woe / Here I go, singing low / Bye bye blackbird / Where somebody waits for me / Sugar’s sweet, and so is she / Bye bye blackbird.” This bird is one of ill omen, representing not only negative emotions but a whole landscape of disappointment that is being left behind.