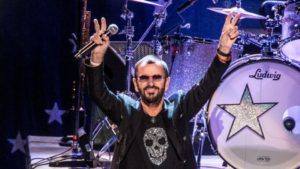 Ringo Starr has joined the growing list of musicians who are cancelling performances in North Carolina/Mississippi in protest of new laws which, in an attempt to protect the masses from the transgender menace in public bathrooms (note sarcasm) removes legal protections for LGBT persons.

(If you’re not up on the goings on, here’s a video to bring you up to speed.)

Give Greece a Chance

Ringo honored by the Rock and Roll Hall of Fame