The Beatles and the Boomers: The Childhood They Gave Us 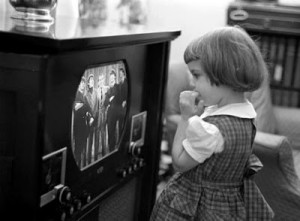 I really don’t remember when I first saw the Beatles.  I have no memory of a ‘before’ and ‘after.’   I think I must have issued from the womb with them firmly attached, like a birthmark.

I’m a first-generation Beatles’ fan, born in 1956, which makes me a younger cohort of the boomer generation.   According to Sociologist and Beatle Expert Candy Leonard, “screaming teenage girls got a lot of attention in 1964 and they’re the ones immortalized in the black and white footage, but the largest number of first-generation Beatle fans were actually boys and girls between five and 10 years old — boomers born in the mid-to-late 1950s.”  We responded to Beatlemania the same way as our older siblings, but the impact was more significant.   Let me explain how. 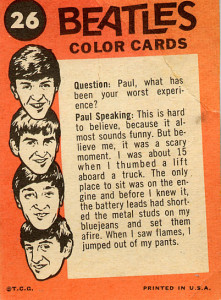 Backside of a coloured Beatle card

Beatlemania turned us into consumers. By the time I was eight years old, I had every record, every magazine, and an impressive collection of Beatle trading cards. I got my hair cut in a Beatle bob and wore Beatle sneakers.  Like my peers, I was a walking advertisement for Beatlemania.  In my age group, self-directed consumerism was virtually unheard of before 1964.

The Beatles changed the trajectory of our childhoods, displacing, as Leonard notes, our usual childhood past-times.  My best friend and I stopped playing house and started ‘playing Beatle’.  She was Paul, I was John.  We spoke in fake Liverpudlian accents and ran from fake fans. (Once we even stuffed her younger sister into a doll stroller and took her around the neighbourhood, pretending she was baby Julian.  The kid wasn’t impressed.)   On any given Saturday afternoon, you’d see us with all the other neighbourhood kids, lined up in a row on my friend’s porch playing air guitar: an assortment of John’s and Paul’s in varying sizes and ages (no George’s or Ringo’s, for some reason), imitating our heroes.   By the end of 1964 we all wanted guitars–and I got mine, an inexpensive acoustic model which, unfortunately, I never learned to play. (Like Paul, I’m left-handed, but unlike Paul, I have no talent).  We were still children, but our interests and passions were now more closely aligned with our teen-aged siblings. 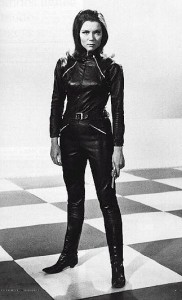 The Beatles became our role models.  Because of their androgynous appeal, ‘playing Beatle’ helped us believe that, as girls, we could become something other than wives and mothers.  The enormous popularity of the Beatles made room for the appearance of bolder, stronger female archetypes, like the bad-ass, fictitious crime fighter Emma Peel. We were no longer stuck with misogynistic caricatures of women, like Ian Fleming’s Pussy Galore (like, seriously, Fleming?).

To say that the Beatles had a positive influence on my youth would be the mother of all understatements. And with George Martin’s passing, I’m reminded even more.  Martin took four rough diamonds, polished them up and made them shine. Thank you, George Martin, and thank you, Beatles, for the childhood you gave me. May you all shine on.